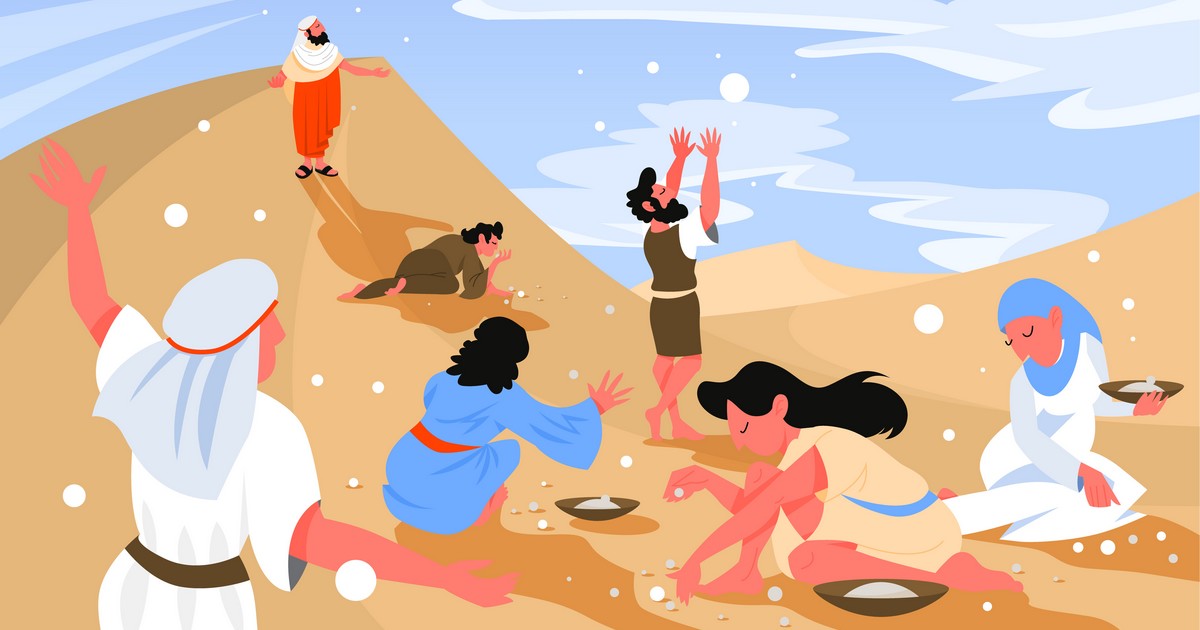 In the three year lectionary, the Gospel text this year for the Eleventh Sunday after Pentecost is John 6:35-51.

Let us observe how our text starts.

First, Jesus declares who He is. He says, “I am the bread of life.”

Next, He says that they have seen him.

Then, He says that although they have seen him, yet they do not believe.

Finally, He speaks about the role of the Father in faith.

How did Jesus get onto this topic? What does He mean by these sayings?

Our clue is in the nearby context that just precedes our text. John 6:30-31 says:

30 Therefore they said to Him, “What sign will You perform then, that we may see it and believe You? What work will You do? “Our fathers ate the manna in the desert; as it is written, ‘He gave them bread from heaven to eat.’”

The people made these statements, and in our text, Jesus answers them. This is a dialogue. The people said something, and Jesus responds to it. He is not launching off to something else. He is addressing their topic.

Notice a line connecting three of their words: sign, see, believe. They said, “What sign will you perform then, that we may see and believe.” They were making a claim about faith. They were asserting a proposition about coming to Christ. They were saying that faith comes by seeing a sign.

Does their illustration prove their point?

Jesus tells us in our text what their attitude toward him was. In verse 43, He says, “Do not murmur among yourselves.” Murmuring does not come to Jesus.

Let us stop to remember. Where have we heard about murmuring before?

After God gave the Hebrews water from the rock to drink, quail to eat, and manna from heaven to eat, what did they do? The whole story of Exodus and Numbers is the murmuring and complaining of the people. They continually wish that God had not brought them out of Egypt into the wilderness. Even when they reach the promised land, what is their attitude? We see it in Psalm 106:24-25

24 Then they despised the pleasant land;
They did not believe His word,
25 But murmured in their tents,
And did not heed the voice of the LORD.

The people are murmuring against Jesus, and their illustration from Moses and the manna proves nothing, because the Hebrews murmured against that too, and even against the promised land flowing with milk and honey.

Seeing is not believing.

Deuteronomy 8:3 tells us why the Lord brought them into the wilderness and gave them manna:

So He humbled you, allowed you to hunger, and fed you with manna which you did not know nor did your fathers know, that He might make you know that man shall not live by bread alone; but man lives by every word that proceeds from the mouth of the LORD.

As the Hebrews were tested in the wilderness for 40 years, so Jesus was tested in the wilderness for 40 days and 40 nights, fasting that whole time. Matthew 4:2 says, “afterward He was hungry.” Luke 4:2 says, “afterward, when [the 40 days] had ended, He was hungry.” What an understatement. I am sure He was hungry before the end of the 40 days. This is to make us understand that it was a trial. He was sorely hungry. But Jesus understands Moses, manna, signs, the Word of God, and life. Matthew 4:3-4 says,

3 Now when the tempter came to Him, he said, “If You are the Son of God, command that these stones become bread.”

4 But He answered and said, “It is written, ‘Man shall not live by bread alone, but by every word that proceeds from the mouth of God.’”

Notice the issue put by the tempter, whether Jesus is the Son of God. How would we know? By a sign of bread? By Jesus turning stones into bread?

No. We know from the Word of God.

Jesus had just been baptized by John. It was immediately after his Baptism that the Spirit drove him into the wilderness to be tempted by the Devil. In that Baptism, the Father gave his Word. The Father said, “This is my beloved Son in whom I am well pleased.” With this Word alone and otherwise starving, Jesus held in faith.

In verse 32, Jesus says, “Most assuredly, I say to you, Moses did not give you the bread from heaven.” No, it was not Moses. It was the Father. But because they did not receive it from the Father, they received as if from Moses, they murmured. They complained. They wandered in unbelief.

Amazingly, even seeing Jesus did not create faith. Remember we observed in our text that Jesus says, although they have seen him, yet they do not believe. Seeing is not believing.

Faith is tied to the Father and to his Word and Sacrament. In our text, in verse 37, Jesus says, “All that the Father gives Me will come to Me, and the one who comes to Me I will by no means cast out.”

What makes God your Father? Your Baptism. You were baptized into the Name of the Father, and of the Son, and of the Holy Spirit. In the Small Catechism, Luther asks:

How can water do such great things?

So, in our text, Jesus connects the Father and the Word. In verse 45 He says, “It is written in the prophets, ‘And they shall all be taught by God.’ Therefore everyone who has heard and learned from the Father comes to Me.”

Let us observe the words of this saying: taught, heard, learned from the Father. Those who are taught, who hear, who learn from the Father come to Christ. As Paul says in Romans 10:17, “faith comes by hearing, and hearing by the word of God.”

On the cross, the Father forsook Jesus because Jesus was bearing our sins for us. “My God, My God, why have you forsaken me?” This is a cry of faith. Despite all appearances, with no sign of being God’s Son – on the contrary, with all signs condemning him – Jesus still calls his Father, “My God,” which is a confession of faith. He can detect nothing in the world, in his body, or in his soul for any assurance. There are no signs of fatherhood or sonship. All He has is the bare Word such as from his Baptism. Clinging to this Word alone, with everything else stripped away, faith still turns to the Father and says, “My God.”