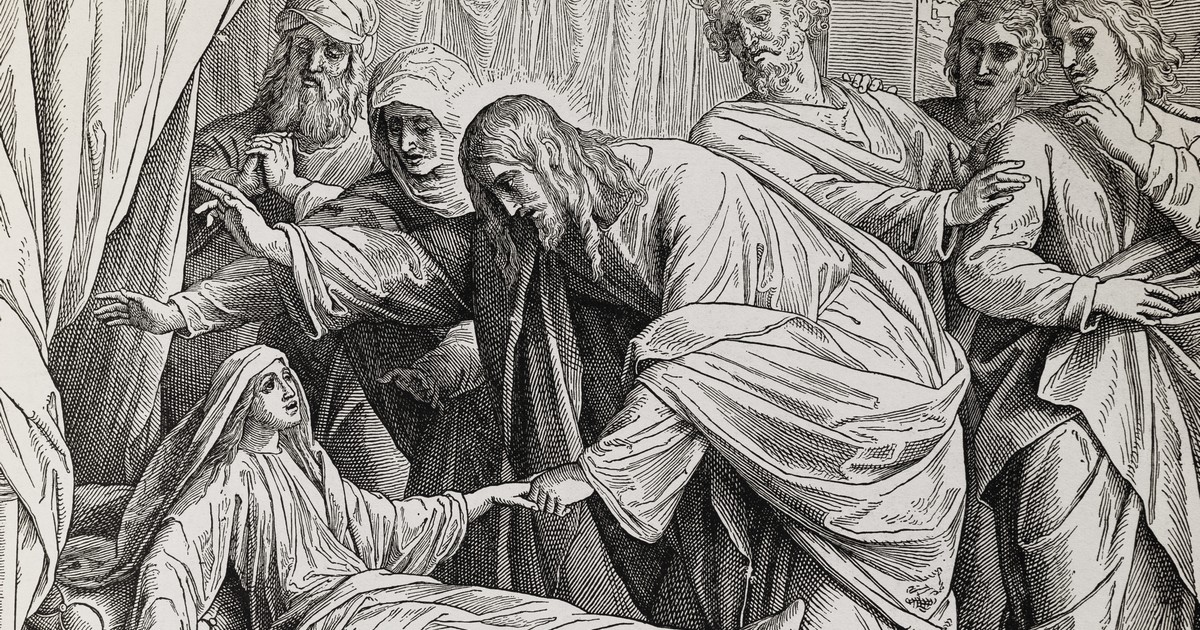 As with other events in the ministry of Jesus, this text shows the priority of the Word of God. Before we have the Word, we might have optimism or happy superstition, but not faith. Before God makes a promise, there is nothing to believe. Once we have his Word, the Holy Spirit uses the Word to create faith, and then we have what his Word says.

Jairus says his daughter is at the point of death. The language means the girl was “in her last moments.”[1] Paraphrased, Jairus says, “My daughter is about breathing her last; she may even now be dead.”[2] Even if Jesus drops everything and runs, He might be too late. The text says, “So Jesus went with him.”

“A great multitude followed Him.” Mark adds, “and thronged Him.” “He was jostled and pushed with the crowd.”[3]

The woman suffering the hemorrhage said to herself, “If only I may touch His clothes, I shall be made well.” This amplifies the density of the crowd and her ostracism from society because she was unclean. The bleeding “rendered her Levitically unclean.”[4] It excluded her from public worship in the Temple and synagogue. It isolated her even from the company of her relatives.[5] “According to the rules of ritual cleanness, she should not have been in the midst of the crowd and certainly should not have touched Jesus.”[6] In Matthew’s account, we learn she touched only the hem or the fringe of his clothes. (Matthew 9:20)

Jesus asks, “Who touched my clothes?” “His disciples said to Him, ‘You see the multitude thronging You, and You say, “Who touched Me?”’” “Countless people had accidentally or intentionally touched him.”[7] His question seemed ridiculous to the disciples.

The text says the woman “told Him the whole truth.” It was an involved story spanning 12 years. Her complete confession took some time, maybe 10 or 15 minutes.

To the disciples, perhaps to Jairus, and to us, stopping for this does not seem as important as pressing on to heal the dying girl.

Jesus stops to find this woman so that He can give her the Word of God. Jesus’ reputation, superstitions about him, and hems of his garments do not save. The Word of God and faith do.

The text says, “He said to her, ‘Daughter, your faith has made you well. Go in peace, and be healed of your affliction.’” Notice that He says, “be healed.” Without the Word from him, her healing would not be complete or enduring. Faith is not just having an optimistic outlook. Before God makes you a promise, there is nothing to believe. Here, Jesus made the woman a promise, and Jesus tells us that she believed. That is salvation.

Jesus called her, “daughter,” his Word that she has a place in the Kingdom. He said, “go in peace.” This is more than physical healing. This is being blessed with right standing before God, forgiveness, life, and salvation.

It looks like Jesus gave her his word after she no longer needed it. She had been healed. And that right there shows what Jesus thinks she needs the most: his word of promise. She needed to have him stop and find her to give her his Word.

The text says, “While He was still speaking, some came from the ruler of the synagogue’s house who said, ‘Your daughter is dead. Why trouble the Teacher any further?’”

The text says, “As soon as Jesus heard the word that was spoken, He said to the ruler of the synagogue, ‘Do not be afraid; only believe.’”

Note that the world has its word. Mark says, “as soon as Jesus heard the word that was spoken.” But Jesus has his Word, “Do not be afraid; only believe.”

Believe what? The girl already is dead. Jairus has lost everything. Now the only thing he has is the Word from Jesus.

And that is the point. Only the Word. We are to believe only the Word of God, and when all other appearances of hope, all supports, props, and crutches are gone, the Word by itself is enough.

The text says the girl “was twelve years of age” and the “woman had a flow of blood for twelve years.” The year the girl was born, the woman began to bleed. In God’s timing, their stories have been bound together for twelve years. Jesus knows, and everything He is doing is deliberate to show us the priority of the Word.

Nothing could stop the woman’s bleeding but the One who would bleed for her sins. Nothing could stop the girl dying but the One who would die for her sins. The woman spent all she had and only got worse, but Jesus spent all he had in his innocent suffering and death for her, which He gave to her freely, and she was completely healed.

As the woman suffering a hemorrhage needed to hear the Word of God, so the girl needed to hear the Word of God. The text says, “He took the child by the hand, and said to her, ‘Talitha, cumi,’ which is translated, ‘little girl, I say to you, arise.’” At this word, she arose. “Jesus speaks to the dead as to the living.”[8] He does the same with us. “When we were dead in trespasses, He made us alive together with Christ.” (Ephesians 2:5)

Hear the Word of God to you. Jesus can heal you from the bleeding sickness of sin. Just as with the woman who spent all she had and went to many doctors but only got worse, everything you might have tried about your sin has only made sin worse. Only the Word of Jesus can stop the flowing sin. Only the Gospel of God’s grace free to you for Jesus’ sake can grant you forgiveness and cleanse your conscience.

In Jairus house too, they had spent a lot of money, just like the bleeding woman had. The text says, there was “a tumult and those who wept and wailed loudly.” These are the hired, professional mourners[9] who are paid good money to weep and wail. “Even the poorest Jews felt constrained to hire two pipers and at least one woman to take care of the mourning in the case of a death.”[10] “The standing of the family called for a goodly number of these women.”[11] In Matthew 9:23 we learn that the troupe included flute players. Jairus being a ruler, the troupe probably was sizeable.  They must have been top shelf because Mark says they raised it to a tumult. The word translated as “commotion” in other contexts is translated as “riot.”[12] One commentator says, “We may be sure that they staged their best performance for this prominent family.”[13]

But as with the bleeding woman, it only made matters worse. Jesus called it a “commotion” and it lacked the sincerity that Jairus himself had. “Their derision proved the superficiality of their mourning.”[14] Look how quickly they go from weeping and wailing to ridiculing, jeering, and laughing. Several of our English translations render verse 40 as saying that they “laughed him to scorn.” When Jesus says, “Why make this commotion and weep? The child is not dead, but sleeping,” they turn on a dime and “they ridiculed Him.”

The case of Lazarus is like the case of the bleeding woman and Jairus’ daughter. Resurrection came by the Word of God. “Jesus cried with a loud voice, ‘Lazarus, come forth!’” (John 11:43) Nothing happened until Jesus said that.

The same holds for us today. First, God gives us his Word. Then, when we believe, we have exactly what it says, forgiveness, life, and salvation.

That is why the most important thing you can do is hear the Word of God. It was important enough that under the urgency of going to heal Jairus’s dying daughter, Jesus stopped to give the bleeding woman the Word.

[4] The expression translated “the fountain of her blood” (NKJV) in verse 29 is from Leviticus 12:7. C. E. B. Cranfield, Cambridge Greek Testament Commentary: The Gospel According to Saint Mark (Cambridge: Cambridge University Press, 1959), 184.

“In this day and age, orthodoxy is absurd.”