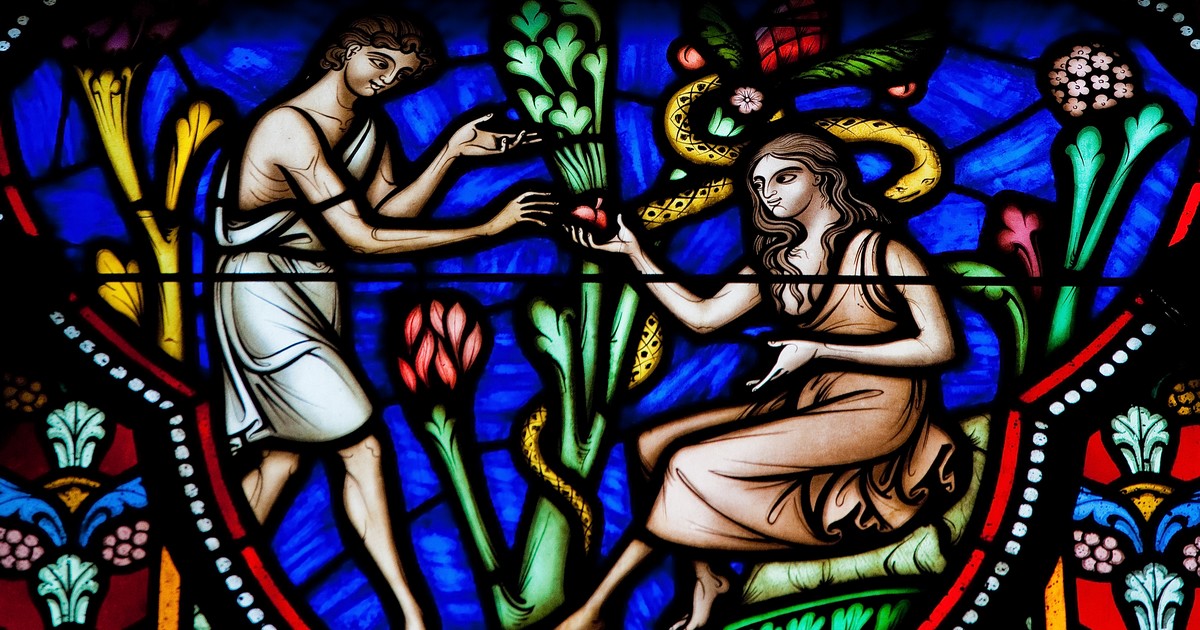 Adam fell down on his vocation as catechist of Eve. Ever since, husbands have had the tendency to default on their calling to teach the Word to their wives. This sin of husbands has had terrible effects in marriage and home, church and community, and these effects are transmitted from generation to generation.

This becomes plain when we (1) know what the word catechism means, and (2) zero in on the Lutheran understanding of the fall into sin.

Martin Luther did not invent the catechism. The word, to catechize, is a Greek verb that described a form of instruction used in ancient schools: kata and echo, to sound over or repeat again. It denoted a form of oral instruction. The teacher said something, and the children responded: learning by repetition. Paul used the word in Gal. 6:6 to refer to Christian instruction, so that it seemed to become almost a technical word among Christians for how they instructed believers.

Faith in the Word is supported by being able to echo, to re-sound, to recount the sound form of words that say sound doctrine. A failure to echo or to recount the words of God’s commandment accurately is at the center of the fall into sin. Once the Word is not accurately repeated, faith in the Word is lost. Then humanity looks for wisdom apart from the external Word of God, such as by eating from the tree of knowledge of good and evil, mysticism, rationalism, enthusiasm, pragmatism, etc.

All of those ideas are wrong. The first and principal sin relates to the Word and faith in the Word. Luther says,

This temptation is the true pattern of all temptations with which Satan assails the Word and faith. Before the desire to eat of the fruit arose in Eve, she lost the Word which God spoke to Adam. If she had adhered to this Word, she would have continued in the fear and faith of God. Where the opposite happens and the Word is lost, there is contempt of God and obedience to the devil.

All this is useful, that we may learn, as Peter says (1 Peter 5:9), to stand undaunted in temptation and to resist the tempter while holding on to the Word with a firm faith and closing our ears so as not to grant admittance to what is foreign to the Word. For truly, these afflictions of Eve and Adam are lessons for us, in order that we may not have the same experiences by being drawn away from the Word and from faith.

She does not mention the punishment as God had stated it. He had simply stated (Gen. 2:17): “On whatever day you will eat from it, you will surely die.” Out of this absolute statement she herself makes one that is not absolute when she adds: “Lest perchance we shall die.”

This is a striking flaw, and one that must not be overlooked; for it shows that she has turned from faith to unbelief. For just as a promise demands faith, so a threat also demands faith. … On her own she is adding to God’s Word the little word “perchance.” And so the deceit of the lying spirt met with success. What he sought to achieve above all – to lead Eve away from the Word and faith – this he has now achieved to the extent that Eve distorts the Word of God.

On her own she added “perchance,” as if it were uncertain that they would die if they had eaten of it, though God nevertheless had expressed His will openly and clearly [Gen 2:17]. She also adds on her own that the tree was indeed not even to be touched.

When she distorted the Word – when she added one little word – that was a catechetical failure to echo or to recount the Word in the sound form of words. Gerhard says, “Afterward, on the basis of the answer of Eve, who did not correctly recount God’s prohibition, the devil becomes more bold and completely denies the Word of God.” Id., p. 15.

Death already has happened. It happens at the instant of unbelief. Pride, lust, envy, and the rest result from unbelief and do not cause death but are only descriptions of death. Those other things delineate what comes of unbelief.

Many questions about Adam’s role in this have been asked. Was he with Eve when she was talking with the Devil? Was he near enough that it could be said he was with her, but not so near as to hear the conversation? Was he right beside her, and not speaking up?

I don’t know. But here is what I do know. Scripture interprets Scripture. In Romans 5, Paul does not ascribe this fall to Eve. In verses 12-20, Paul points to Adam ten times:

This makes no sense if we view Eve’s sin as one offense and Adam’s sin as another offense. There is one offense. This one offense is the offense of Adam. How are Adam and Eve involved in one and the same offense, so that naming only Adam’s offense does also include Eve’s same offense? Only the Lutheran understanding of the fall can answer this.

The fall is loss of the Word and loss of faith, before pride or anything else is involved. Both Adam and Eve lost the Word and faith. Eve gave a distorted echo of the Word. Adam gave no echo at all. Adam failed to confess the Word to Eve when she was being tempted. You might protest that Genesis does not say this, but how do you evade Romans 5?

Husbands, we are involved in the sin of Adam, the first husband, when we fail to catechize our wives. Failure to catechize is as much an evidence of loss of the Word and faith as is a failure to, as Gerhard puts it, “correctly recount” the word.

It’s not hard to catechize. Luther’s Small Catechism itself, leaving aside explanations of it that others have added, is just a little pamphlet. My pastor likes to call it the Little Catechism (as do church historians such as Philip Schaff), and little it is.

Just get two copies of the Little Catechism. Give one to your wife. No, check that. Get three copies and give two of them to her. She’ll put one in her purse and carry it with her. The other she will keep at home. Those are going to be the Catechisms you gave her. To her, they will be special. Then several times each week, read aloud to her one of the six chief parts. It takes only about three minutes. Remember that repetition is a key to learning. When you finish the six chief parts, start them over again. Keep cycling through them for as many years as God gives the two of you together.

When you took on the estate of marriage, you took on the duty to teach your wife. She has a right to expect this from you. Paul says, “Let them ask their own husbands at home.” 1 Corinthians 14:33.

Once I heard a standup comedian say, “The four most terrifying words in the English language are, ‘We need to talk,’ when spoken by a wife to a husband.” Well, men, you and your wives do need to talk, and Dr. Luther has made this as easy as falling off a log. Don’t wait until she takes up her rights as Paul taught and asks you about the Word and faith. Lead the way. Love your wife with the Small Catechism.

Stage 4 Cancer – Sorry State of Catechization in the Home